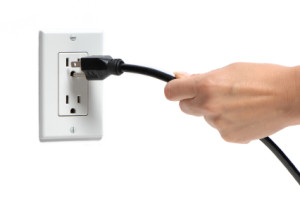 As the use of renewable energy grows we hear occasional reports of curtailment – when wind turbines and solar generators are shut off because they are putting too much power into the grid.

This can happen because transmission development lags behind; it is far faster to build wind and solar than to build transmission to serve them. The Competitive Renewable Energy Zone (CREZ) policy in Texas was a response to high levels of congestion in the wind fields, and the potential for huge growth.

We also hear about curtailment due to the famous Duck Curve.  The California ISO put out a graph showing that as solar grows it will cause periods of “over generation” during sunny days, especially in the spring when demand for air conditioning has not yet picked up. In a report commissioned by California utilities, E3 analyzed a solar-heavy system heavily reliant on curtailment.

My colleague Rachel Golden, working on a graduate degree at UC-Berkeley’s Energy Resources Group (ERG), spent last summer working with the California Public Utilities Commission.  At the request of Commissioner Peterman, she investigated the issue of curtailment of renewable energy.  How big a problem was it in California or elsewhere?  What would happen in the future?  What were the impacts on generators and investors?

And most importantly, what should be done about it?

With a bit of polishing, the memo is now an article in Electricity Journal. You can read it here on the Power Markets website.

Bottom line:  Curtailment is an easy response to renewables integration, but there are usually smarter ways to solve the problem.  Curtailment is wasteful and undermines the investor confidence needed to transition the California power system.  In moderate amounts it can be a useful tool; but only if policy changes are made to make it compatible with the long term growth of renewables.